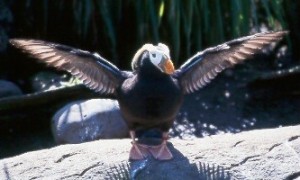 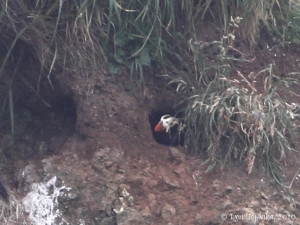 Puffins, charmingly stout sea birds,  return each year  to Haystack Rock to lay eggs and raise their chicks after having spent the last eight months floating and diving in the Pacific. Iconic Haystack Rock in Cannon Beach, steps from the Tolovana Inn, provides one of the most accessible locations to observe the comical and versatile puffins nesting in their natural environment.

Puffins are comical because of their distinctive look.  They have black, football-shaped bodies with stubby wings and big orange feet, topped with white faces, bright orange beaks and yellow tuffs.

Puffins are versatile because of the many skills they rely on to survive.  They fly out to sea, live on the water, dive 200 feet deep for food, and return to nest in burrows under the ground.

The sea birds spend their time in loose groups out on the ocean while looking for their mates or meeting new ones before they descend on the top of Haystack Rock in April to clean out old burrows or dig new ones.   They will continue their spring time rituals of courtship and mating until each female puffin lays a single egg and incubation begins.    Few puffins are actually visible while the egg is incubating.  The ones who are not sitting at the bottom of their burrows spend most of their time out at sea.

You can still see them as they come and go, but it will take patience. There are usually only two kinds of birds flying around Haystack Rock: gulls and puffins.  Gulls soar gracefully, puffins do not.

In June, when the eggs begin to hatch, activity really picks up.  The parents are constantly  coming and going, heading out to sea to catch fish for the rapidly growing chicks.  After about 45-50 days, the chicks will reach full size, and their parents will leave them, heading back out to sea.  After a few hungry days, the newly fledged young puffins come up out of the burrow and  work up the nerve to jump off the cliff,  eventually  taking flight and heading out to sea. Their short stubby wings, which make them great divers, do not make them good fliers.

The best Puffin viewing is April and May, then again in late June and July.  Watch during low tides and bring binoculars or a spotting scope.  Without viewing aids,  Puffins  look like big bumblebees buzzing around the top of the rock.