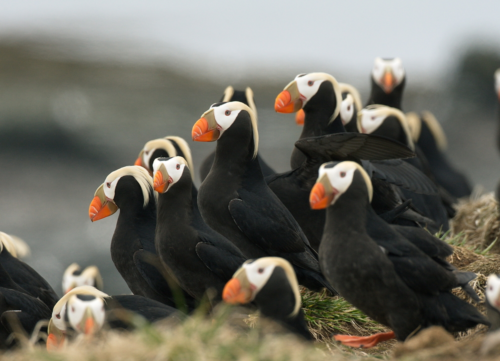 Haystack Rock is home to the largest on-shore Tufted Puffin population in the continental United States and they are returning now to Cannon Beach.

The Puffins are just one more reason to love Cannon Beach.

The Tufted Puffin circus — truly,  the group is called a “circus” — spends summers at Haystack Rock.  The birds breed and raise their young in burrows atop Haystack Rock, just offshore.

The Tufted Puffins nest here from April through August.  Mornings between 8-11 a.m. are the best time to see them.  That’s when they are either roosting or fishing to feed their young.  It’s best to spy them with binoculars or a scope, usually around the grassy part on the northeast side of Haystack Rock.

After August,  they leave to spend winter on the open ocean.

The Haystack Rock Awareness Program provides volunteers on the beach to guide you as you observe these comical birds.  Check the website for a schedule and more information.