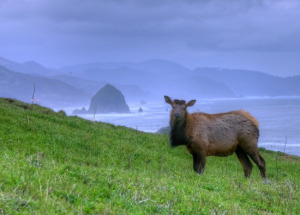 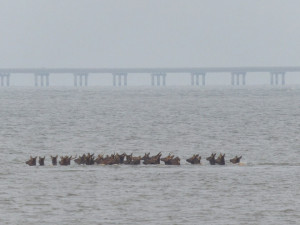 During the quieter, winter season at the Oregon Coast, keep your eyes peeled around dusk and dawn.  That’s when you are mostly likely to see a majestic Roosevelt elk emerge from the shadows of the forest to graze in open meadows or wander along the edge of Cannon Beach looking for a bite to eat.

Elk are nocturnal herbivores that munch on ferns, shrubs, lichen, various berries, and grasses.  They also feed on seedlings of Douglas firs and western cedar.  With the abundance of food and cover, along with mild winters, the elk rarely migrate, spending most of the lives in the same area.

Or, you might even be surprised like a young woman who recently spotted an entire heard of elk swimming near the Astoria Bridge.

According to a spokesman with  the Oregon Department of Fish and Wildlife, it’s not unusual for elk or deer to swim in rivers if they are motivated to find another place to graze or if they are seeking protection from predators—primarily humans or cougars.

Roosevelt Elk are found between in the Cascades from British Columbia to Northern California, and especially in the Oregon Coast range.   Named by Theodore Roosevelt, the desire to protect North America’s large, coastal dwelling elk was one of the primary forces behind the establishment of Washington’s Olympic National Park in 1909.

Elk are matriarchal.  Herds are generally led by females, comprised of calves, and adolescent bulls and cows.  Males live separately, except during the late-August breeding resulting in calves born the following spring.   Males weigh between 700 and 1,100 and cows about 625.

Astoria resident JoAnna Dotson spotted this herd of elk swimming near in the Columbia River on January 2, 2015. (Copied from OregonLive.com.  See more photos and read more at this link.  http://www.oregonlive.com/multimedia/index.ssf/2015/01/post_39.html