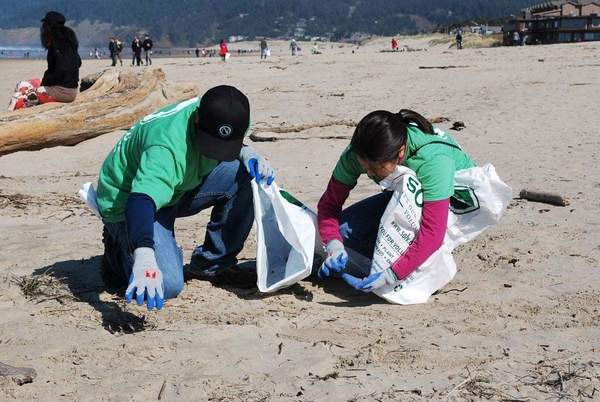 Guests of Tolovana Inn who join the Solve clean-up at the adjacent Tolovana Wayside will be eligible for a discount for the September 18-19 weekend.

Volunteers will gather on Saturday, September 19, from 10:00 am to 1:00 pm, as part of the annual  Beach & Riverside Cleanup and the International Coastal Cleanup, a world-wide effort to keep our beaches healthy.

Beach captains will direct all volunteers.  SOLVE will provide bags and gloves. Volunteers are encouraged to bring their own reusable bucket/bag.  Volunteers are also asked to bring an old colander or a kitty litter scoop to sift the sand for small items, like tiny bits of plastic and cigarette butts which are extremely harmful to shore birds and marine life.

Dress for the weather, rain of shine. And, bring you own reusable water bottle.

Volunteers can Pre Register with Solve here or show up before 10am on Saturday.

Call Tolovana Inn directly to make your room reservation and be sure to mention that you are a SOLVE Beach Cleanup Volunteer to be eligible for special rates.

SOLVE has been around, and doing good, for decades. The organization originally was called S.O.L.V. (Stop Oregon Litter and Vandalism) and was created by Governor Tom McCall and other community leaders in 1969 to address the need for community action in the ever-growing state. Today SOLVE continues to build on that vision to improve the environment of Oregon and build a legacy of stewardship.

Annually, SOLVE mobilizes over 35,000 volunteers and organizes over 1,000 cleanup and restoration projects throughout the state.

PacifiCorp is also a sponsor of the event. Last year, dozens of employees, friends and family turned out to help clean the beach.

The View from Here

Showcased in Portrait magazine’s new story on Cannon Beach, is a cozy view of iconic Haystack Rock from the lawn outside Tolovana Inn.  The property is aptly described as a “traditional family favorite…the beloved three-story beachfront buildings dotted with decks for watching the waves below.” 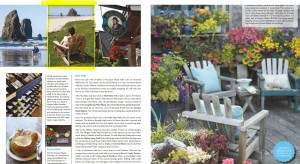 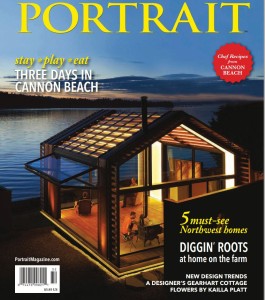 And they are off.

1,050 teams of runners, from every state in the union and 36 nations, have come to Oregon to compete in the 34th annual Hood-to-Coast Relay.   Another 450 teams are competing in the Portland-to-Coast and High School Challenge Walk.

That means about 18,000 runners and walkers are  participating, with each team supported by two team vans, shuttling team members between race legs.

The 198-mile Hood to Coast Relay, founded in 1982, started  at 5 a.m. Friday at Timberline Lodge near Mount Hood. The Portland-to-Coast Walk Relay, added in 1991, and the Portland to Coast High School Challenge, added in 1998, started today too.

The starting line is at Timberline Lodge and racers cross the finish line at the Seaside Turnaround, just 9 miles north from Cannon Beach, where the Tolovana Inn annually hosts teams and team supporters for this incredible event.

The teams switch participants every few miles.  The relay race has  36 legs, varying from  from about 3.5 to 7.75 miles. Each team member runs at least 3 during the non-stop event.

The race legs are long, and factoring the terrainchanges and the weekends’ forecast rain, the run can be gruelling. But the shared struggle leads to shared success, and a huge post-event party on the beach at nearby Seaside.

Each year, teams are chosen by lottery from the entries postmarked on the opening day of registration, typically in October of the previous year.   The race has sold out opening day of the lottery for the past 17 years.

Who’s your daddy? by Ellen Zimet

The Palette Puddlers are a group of professional female artists, many of whom have painted together for many years. Every Monday, rain or shine, they gather to paint in some inspiring Cannon Beach location. During their weekly get togethers, they provide mutual support, critique artistic efforts and share the joy of creativity. They just have a lot of fun, too.

Labor Day weekend is one of the three times each year when the group creates an art gallery at the Cannon Beach Chamber of Commerce to show and sell their original work. (Other times are over Memorial Day weekend and at the Stormy Weather Arts Festival.) The Labor Day exhibit will be set up at 207 N. Spruce Street, and hours are 10 a.m. to 5 p.m., Sept. 4-6, and from 10 a.m. to 3 p.m on Monday, Sept. 7. Participating artists will provide both morning and afternoon demonstrations of their particular styles throughout the weekend.

Near Camp, by Susan Bish

The Palette Peddlers are Louise Birkenhead, Patricia Button, Ireta Sitts-Graube, Susan Bish, Jeannette Gran-Davis, Debbie Janssen, Betty Brower, Judith Fredrikson, Jo Pomeroy-Crockett, Sheila Brown, Mary Ann Gantenbein, Susan Thomas, and Ellen Zimet. Many of these artists show their paintings and artwork in other venues in the Northwest. Their works can be found in homes throughout the state, as nationally as well. 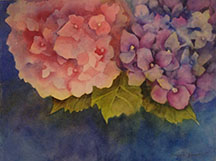 The Palette Puddlers have created their fourth art calendar highlighting the artwork of individual group members. Each month of the year features a painting in the artistic style of one of the 13 artist members. Calendars cost $20. They can be purchased at the event or online at palletepuddlers.com.

Exploring the tide pools around nearby Haystack Rock is an inviting summer activity for guests of Tolovana Inn at Cannon Beach. 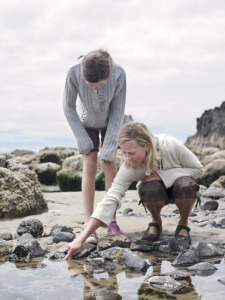 n and National Wildlife Refuge.  And, the Haystack Rock Awareness Program (HRAP) provides both staff and volunteers daily throughout the summer to guide beachcombers and answer questions about the natural world.

HRPA is actually a stewardship and environmental education program whose mission is to protect Haystack Rock, and the intertidal and bird ecology surround it.   Each day, members set up an extensive interpretive program including signs and educational brochures, bird stations with spotting scopes and often times, microscopes too.

To be a good s 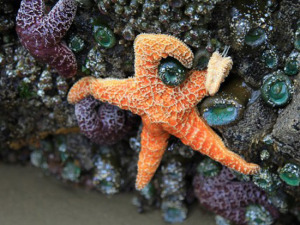 teward, visitors are reminded that the intertidal areas around Haystack Rock are fragile ecosystems.  Guests are encouraged to tread lightly around the tide pools and stay on sand or small bare rock to avoid stepping on vulnerable animals like anemones and barnacles.    Be gentle as you observe wildlife in its natural state, being sure to leave the natural environment undisturbed.

Since its inception im1985, the HRPA has educated hundreds of thousand adults and children about this amazing island and the marine-related life around it, protecting it each day, and for generations to come. 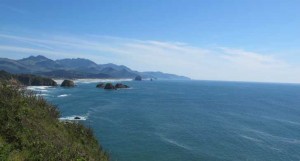 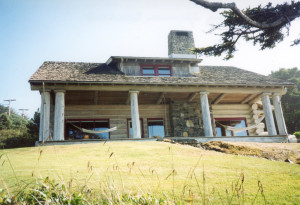 On of the notable homes in Cannon Beach is the former summer residence of past Gov. Oswald West.

The two day event, now in its 12th year, is a major fundraiser for the Cannon Beach History Center & Museum, and provides participants an opportunity to visit unique coastal homes and private art collections.

The tour will begin Saturday, Sept. 12, at noon, at the Tolovana Inn, with a luncheon prepared by Culinary Capers, followed by a round-table discussion moderated by CBHCM board president, Kimberley Speer-Miller, who will provide the unique history of Cannon Beach.   Equipped with a new perspective, attendees will start the self-guided tour.

The Saturday tour begins at 1:00 pm and will conclude with a fun reception at the Cannon Beach History Center and Museum including wine, live music and appetizers and a raffle.

On Sunday, Tolovana Inn will be the site of a wrap-up event, an English-style, Garden Tea Party.  Guests will enjoy Oregon-made teas, homemade scones and treats in a flower-filled setting.   The event will be highlighted by a presentations from Debbie Teashon, owner of the Rainy Side Gardener and writer.   Her topic will be “Life Beyond the Two-Season Garden.   She is the co-author of Gardening for the Home Brewer: Plants for Making Beer, Wine, Gruit, Cider, Perry, and More.

Tickets for each event are available to purchase separately. Luncheon and lecture tickets are $25; Cottage & Garden Tour tickets are $30, and Garden Tea tickets, $20.  A weekend event package is $60. All tickets can be purchased on line throught the museum.  (www.cbhistory.org) or by phone at 503-436-9301. 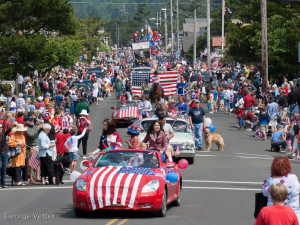 Seabird app to be introduced at Haystack Rock Saturday 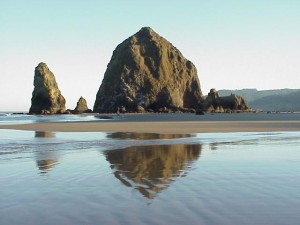 Tuesday Shopping Day at the Farmers’ Market in Cannon Beach

The Cannon Beach Farmers Market is located in the City Hall parking lot. Vendor hours are 2:00 to 5:00 p.m., with music, prepared food, and community booths opening at 1:00 p.m., Tuesdays through September 29. Besides providing fresh food to visitors and residents alike, the Tuesday weekly gathering is a fun community event.

Over in the prepared food department, O Falafel and Casa de Tamales are back and will be joined by newcomers Hello Waffle and Seaside Kombucha. Sleepy Monk will serve cold press coffee, available at Dough Dough Boys Bakery.

This year, a children’s program will be introduced, providing kids with a Famers Market Passport to track their attendance and activities. 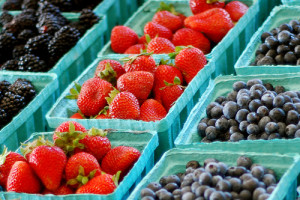