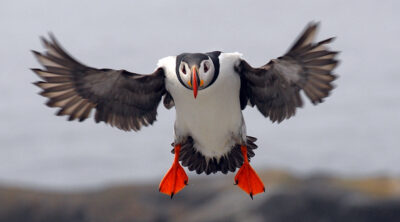 Capistrano may have its swallows, but Cannon Beach has its puffins. Each spring, puffins that have spent the last eight months floating and diving on the open seas of the Pacific Ocean return to Cannon Beach’s Haystack Rock to lay eggs and raise their chicks.

Puffins nest on Haystack Rock from April through July and are best viewed now through July. Almost comical, puffins are colorful, squat, blackbirds with large, bright orange bills, white facial features, and tufts of yellow feathers above the eyes. Look for them on the grassy north slope of the rock.  There,  they burrow tunnels into the soil so nests, eggs, and chicks are protected from predators.

Puffins are versatile because of the many skills they rely on to survive.  They fly out to sea, live on the water, dive 200 feet deep for food, and return to nest.

Haystack Rock is home to the largest Tufted Puffin breeding colony in Oregon.  In early April when puffins show up at Haystack Rock, most have already found their lifelong partners.  They are returning to the same protected burrow they used last year to raise their young.

The Tufted Puffins will spend about 16 weeks at the rock.  For the first couple weeks the puffins stake out their territory and clean up their burrow.  Once their burrow is ready, the female puffin will lay a single, chicken-sized egg, which both the male and female incubate.   Incubation usually lasts 41-54 days. Though usually tucked back inside the burrow, newly hatched puffins appear at the ‘Rock’ beginning in late June through mid to late August.

Despite the fact that you may not be able to see the pufflings, activity around the rock is hectic and plentiful: it is fun to observe the parent puffins making multiple trips to their burrow with bills full of fish for their young.  You can distinguish the Puffins from gulls.  Gulls soar gracefully, puffins do not.

About 38 to 60 days after hatching, under the protection of dark (to escape the ever-watchful, hungry eyes of bald eagles), all of the puffins will leave the safety of the rock and return to the open ocean, where they will spend the winter.

The best Puffin viewing is April and May, then again in late June and July.  Watch during low tides and bring binoculars or a spotting scope.

Without viewing aids,  Puffins look like big bumblebees buzzing around the top of the rock.